Here’s to the Crazy Ones Poster & Its Issues 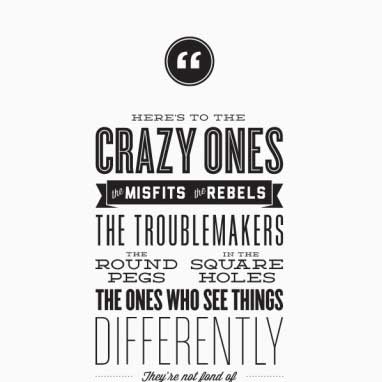 Awesome looking “Steve Jobs Quote” poster, with content from Apple’s classic “Here’s to the Crazy Ones” keynote/ad. It’s a pretty poster, but bends reality somewhat as the words were actually by Rob Siltanen and Ken Segall at ad agency Chiat Day. A commenter in Swiss Miss said it best:

“Too rich! Ripping off Apple advertising to raise money for an organization largely funded by the Bill & Melinda Gates Foundation.”

The video above shows the original non-aired Crazy Ones ad, with new overlay speech by Steve Jobs himself, which makes it much better.