In this post I compare my home Wifi speeds to real-world LTE speeds in Helsinki.

I have currently only switched to 4G LTE plan on my personal iPad mini on the Saunalahti carrier. The company ‘siPhone 5 plans on Elisa have not been updated to LTE yet. Therefore this post details speed attained with iPad mini.

Today I’ve seen some Elisa iPhone 5’s LTE speed tests on Facebook and Twitter. Network bandwidth in those screenshots seem slower than the LTE speeds I’m showing here on the iPad mini + Saunalahti carrier. But perhaps they are in line with the last results of this post regarding outdoor speeds.

My home ADSL, also from Saunalahti, promises 20 Mbps down and 1 Mbps up. I access it through Wifi. For reference, I live about 6 kilometres outside of the immediate Helsinki city center in East Helsinki.

Here’s the actual throughput from the ADSL+Wifi combination at my home: 11.29 down and 0.83 up. A far cry from the promised download speed, but it’s something at least. Upload is pretty much as promised, but frustratingly low in today’s world — less than 1 Mbps. 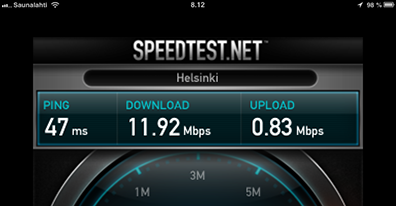 So what kind of speeds does the iPad mini get on LTE in the same apartment?

LTE speeds were 33.45 down and 9.81 up. LTE triples the download speed and is ten times faster in upload than ADSL+Wifi (!). That makes for some fast photo & video uploads, should I tether my computer to the iPad mini. 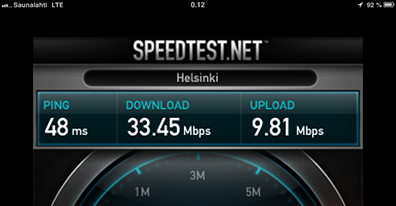 A later LTE test the following evening brought even better results: 32.74 Mbps down, 27.89 up. That upload speed is amazing. It’s double to what we get even in our work office with some kind of semi-fat pipe. 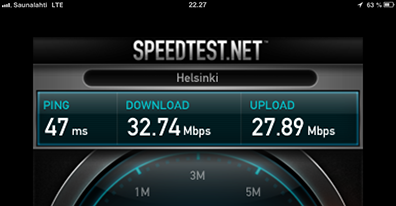 LTE is proving to be quite a beast, although the upload speed is swinging up and down quite a lot apparently.

Also note, that there’s no PING difference between ADSL+Wifi and LTE. They are identical at 47—48 ms, so even multiplayer FPS gaming shouldn’t be affected.

LTE doesn’t seem to have as large and all-penetrating coverage as basic 3G data in downtown Helsinki. For example, LTE is not visible at all inside our office building in Köydenpunojankatu 2. The building is not even that deeply encased in other buildings, and there’s even an open seafront just few dozen meters out. Still, no LTE.

LTE also doesn’t seem to work inside metro trains, even though 3G coverage is nowadays pretty good there, especially near every station.

But what about outdoors in downtown Helsinki? I checked LTE speeds in the nearest tram stop near our office. It’s in the said open seafront, without any buildings on one side, and an open market square on one side. 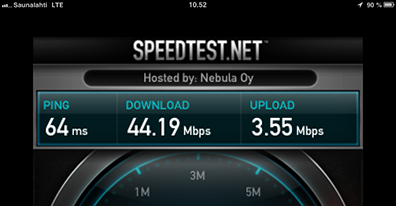 The LTE speed in open air was 44.19 Mbps down, 3.55 Mbps up. That download speed is quite remarkable. For some reason the upload speed takes a nose dive, but let’s remember it’s still more than 4 times as fast as my home ADSL+Wifi upload speed. Other downtown tests have been very similar to these numbers, or there has been no LTE signal at all at some places.

If these LTE speeds keep up and don’t start to crumble, now that more and more people are finally able to access the network, it seems possible to ditch home ADSL connections for a 4G+Wifi dongle. Also a tethering mobile road warrior could always bring an extremely fast internet with them where ever they go, and not mind at all about Wifi cafés or even clients’ slow guest Wifi networks. The speeds are simply faster than wired connections in general.

From this non-conclusive test it also seems that in the residential area DL and UL speeds are more stabile and better in sync with each other than in the city center. In the center you either get hyper fast downloads but much slower uploads, or, you get no LTE at all. More 4G network routers are probably needed in the city center so that the signal gets strong enough to penetrate city blocks filled with large stone and concrete buildings.

Also note that there’s some difference in 4G technologies UMTS Dual Carrier (max 42 Mbps) and LTE (max 100 Mbps). Current speeds seem to be in the Dual Carrier range. If somebody could please enlighten me what is status of these technologies in Helsinki, and when, if ever, are we getting those 100 Mpbs speeds?

I’ll slowly continue these tests in trams and buildings to get a wider understanding of coverage in areas which happen to be important to me. Would be interesting to test LTE on a train trip but I don’t currently have one planned. If you have any other tests to report, please comment.