Fluent.io — A New(ish) Take on Email

“We’re trying to … imagine the future of email,” Adams said. “We think that email has sort of stagnated and got into these set patterns of people using it and it’s not being pushed forward any more.”

It’s got an instant-action take on messages, and features a “stream” of messages and other goodies. I can’t help but to compare it to the Gmail app Sparrow for OS X, which features a similar stream and Gmail style direct reply functionality.

But Fluent seems to have a very nice and visual way to handle attachments, photos, and searches. In fact, these are all features we at Nordkapp suggested to our client few years back. Sadly they didn’t implement them, and now there’s all sorts of startups doing the same things.. 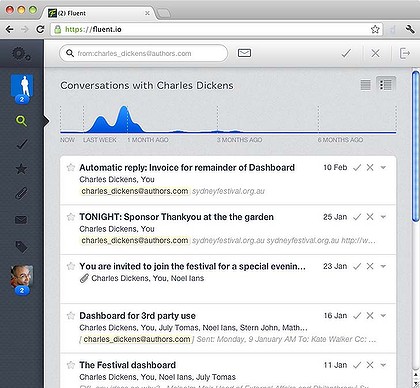 Fluent is a web service that still seems to do attachments better than the desktop app Sparrow, which is interesting. And they seem to have cool visualizations and things which beat Sparrow. Hopefully there’s more spots in the Beta program soon again!

— Try it now on fluent.io
— Article about it: Aussies’ fix for ‘stagnated’ email