School buddies on a map (with bad data) 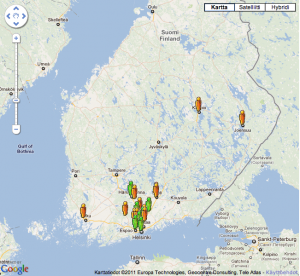 Koulukaverit.com (translates to schoolbuddies.com) is a Finnish based social network, launched in 2002. This was way before Facebook which was not launched until two years later on 2004 for Harward students, and which thus didn’t become available to Finnish people until much later.

Koulukaverit originally only offered the user a possibility to list their previous schools and then easily search/show other people from those same schools. Then you could enter few lines of text what you are doing currently. Many are in the lines of “I now have 5 children and 2 dogs. I don’t do much else.” These were like a version of status updates many years back. Only that you didn’t really update it many times a day, no, instead you did it once when you joined the service and that was more or less it.

Despite one-off nature of these status messages this still provided one of the successful features of Facebook: stalking. Facebook stalking has undoubtedly always been a factor in Facebook’s success. It seems we can’t help but look at other people’s stuff if we have the chance to. Sure, Facebook has many other features too, but back in the day of Koulukaverit.com’s success this was enough to draw in pretty much all of my school buddies to the site. The late adopters came in years later than the first ones, but eventually it provided somewhat “complete” glance to what my old school friends were doing. It was like a class reunion where you’d get to exchange only two sentences with a friend — you could still get the general idea.

If I remember correctly one was able to send some sort of in-service mail or see other people’s email addresses in the service. This was beneficial as I think we organized a real high school class reunion years ago with the contact information found on the site. Very Facebooky.

The site was acquired in 2003 (!) by a big Finnish telecom operator Elisa. The site claims to have 929 000 users, which is quite a lot in a country of 5 million people. So it must have seemed like a good investment to tap into such user base/growth potential at the time. (At the time there was only 140 000 users.)

The site always looked horrible, was badly designed and often hard to use despite the minimal feature set. It seems a redesign never got done as it still looks the same. One can also think that Koulukaverit.com is a system in threat of destruction under the huge pressure of international competition. How could this service survive against Facebook for example? It can’t. It’s basically Finland-only which limits the user base hugely, and there obviously haven’t been any efforts to make it modern. They also added some annoying paid-only features (let’s all get a “GOLD MEMBERSHIP”!) which surely killed the last bits of enthusiasm for the site.

Only way anyone even remembers the service is their newsletter emails that still come every now and then. The latest one had at least an interesting link to a simple Google maps mashup that shows whereabouts my old buddies are. Sadly, I don’t trust the validity of this data, as even I can’t remember what bullshit I’ve written there years ago, or where I lived then. I know I have a friend living in Japan for example. Not on the map.

A nice-ish effort but way too little way too late. This could be done with a Facebook app nowadays. Koulukaverit has become an empty hull. Perhaps it’s good to have this information in a Finnish service, instead of just in an American service, but come on… This is like communist russia of websites. Some effort please. Or then just kill it.